I can't remember the last time that I have been this exhausted - physically and mentally. The last 10 days are a blur as Ally has been in 2, yes 2 different hospitals for RSV and pneumonia. There have been tests, suctioning, medications, breathing treatments/chest PT, alarms constantly going off, oxygen on/oxygen off, and the list  goes on. Most of what has been done to her has required me to restrain her while she screams and kicks and flails around. Everyone who interacts with her comments on how strong she is and what a fighter. I keep reminding myself that what they are doing is meant to help but after days and days of this I am reaching or have reached my limit. It takes everything in me to not cry/scream along with her.

I have essentially been staying at the hospital with her round the clock. I lost it Sunday morning and told Gabe that I couldn't do it anymore - if I had to hear one more alarm go off ,pin her down or adjust her nasal canula one more time I was going to scream. We had already done Sunday - Thursday at Mercy and now were 2 days into our stay at St Luke's and Saturday her sats kept dropping and the amount of oxygen that she needed kept going up. I felt like things were just getting worse not better. Gabe ended up staying with her Sunday night and I was able to go home and have a day with Sydney and actually get some sleep. Once I started analyzing (which I have a tendency to do) why I was "losing it" I realized that since her first admission I had had several days back to back without any sleep and then have averaged 1-2 hours sleep on the remaining nights... no wonder this old mama feels exhausted.

I keep telling myself that this will be over soon and Ally will feel better- I have to believe that we will be able to go home soon and life will settle back into a routine. My new mantra is "I'm a strong woman"  - maybe if I say it enough times or with enough conviction it will come true!
Posted by Cathy at 7:17 PM 1 comment:

"Mama bup"  -  Oh what a sweet sound those two words are!

Quite an exciting night tonight when my sweet little Ally started pulling on my legs wanting me to pick her up and very clearly said "Mama bup" . She has been saying Mama for awhile and I have been saying/signing  "up" to her for months when I pick her up but she really has not responded in the past. I have plugged along knowing that one day she would put it together and sign or say "up".

Since I have been home with her for Christmas break we have spent a lot of time working on signing and "talking".  The  data collector in me has tracked her signs and words on my newly created flow charts/tables.This past week she has consistently signed 25-30 words voluntarily, another 15-20 with cues and spoke between 5- 8 words daily. Her speaking consists of some intelligable words and sounds that she makes consistently for things. I knew that she was communicating more but to see the cold hard facts right there in print really let me see how well she is doing. I printed everything off  and plan to make a communication binder so that I can have a record of how she is doing. Maybe I missed my calling and I really should have been a researcher since I love "collecting evidence".

Today she has not been feeling well  - congestion again- and had been quite fussy. Not really into all the activities that I had planned and basically spent the day hanging out with me and wanting me to hold her. She heard the word up many times today as I was repeatedly reaching down to pick her up and by this afternoon she started to play around with the b and p sounds.  Tonight I was thrilled when she put two words together and very clearly communicated what she wanted. I think I just might have to record this as her first sentence!

I have learned from this experience. It has taught me that persistance and repetition are key. I know this is true with my own patients but I think because I want her to talk to me so badly that I loose sight of what I already know. When I didn't think she was catching on or that what I was doing was effective it actually was doing something. It was just a matter of time for her to process it, be able to motor plan and to execute it and when everything was in place she was able to put it together. This helps me hang in there and to reaffirm my conviction that Ally will talk when she is ready. For right now... Mama bup is music to my ears!
Posted by Cathy at 7:43 PM 1 comment: 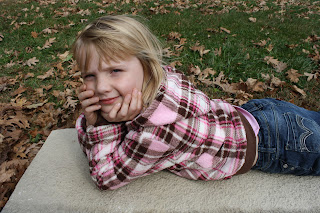 Sydney, my 6 year old, asked me this morning if she had ever outcluded someone. It took me a moment to decipher what she meant and then I asked do you mean exclude them... she responded yes, you know like don't let someone play with you ... you outclude them. Well I thought about it a minute and I have never really witnessed Sydney outcluding anyone. That is one of the many things that I love about her. She is really aware of how others might be feeling and makes an effort to include everyone when she is playing.

Sydney loves to play with Ally and I just hope that as they grow bigger that she will continue to include her as much as she does now. 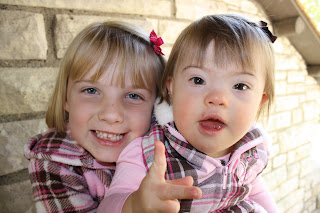 One of the worries that I have about Ally is if she will be included by her peers.... will they be kind and try to find ways to allow her to play with them? All I can hope is that they will learn a lesson from Sydney and if they ask their moms if they have ever outcluded someone that the answer will be a resounding no!
Posted by Cathy at 11:19 AM 3 comments:

A New Year and New Resolutions

As we head into 2012 I have made some resolutions for the upcoming year... I do that most years and then quickly forget what they were so my track record for keeping/achieving resolutions made on January 1st isn't the best. I'm not sure what makes that happen when I am actually pretty good at doing what I say I am going to do - maybe it's the fact that we are supposed to make resolutions on the 1st that I balk at and that I actually want to make them when I want to, not when I am told to...ahhh the rebel raises it's ugly head!

Well the big resolution that I have made is to be a stronger advocate for Ally. This year will bring her 2nd birthday and all sorts of new milestones for her and I want to be there to make sure that she is getting the help that she needs to achieve her highest potential. There are times since her birth when I struggle between the balance of being Ally's mom and also being her therapist. I have intentionally not looked at milestone charts or read much about Down Syndrome and development since she was born knowing that I could get really wrapped up in that - but this is the year to start expanding my knowledge and taking action.

My goal for Ally for this upcoming year is to expand her communcation strategies. I have already talked myself out of going back to school to be a Speech Pathologist -don't think that that idea has not crossed my mind lots of times in addtion to becoming a pedatric PT and taking every pediatric PT course available and OT ones that they would let me into, being a pediatric clinical  specialist and the list goes on. Short of taking on a new career, I plan to start exploring options for communication and allowing myself to be detailed and yes a bit anal about her language skills. I have already created my first lists/charts for the new year -one for a feeding journal associated with signs for the foods she eats and tracking her self feeding skills and one for the signs and words that she uses daily. There  is nothing like a nice table/chart to make this Mommy feel that she has a grasp of where her daughter stands right now and to help point us in the direction we need to go.

Another goal is for me to become more technology tolerant and to actually step out and start using some of the amazing tools that are available. 2011 found me opening a Facebook account and  now 2012 brings me starting a blog... we will  see how this goes  as the learning curve is steep but it should be quite a ride!  I don't really have a goal in mind for this blog other than to journal about life with Ally  - we will have to wait and see what develops. Looking forward to a great year.

This blog is intended to be the story of our life - the joys, challenges and adventures with an emphasis on the bits and pieces that bring me the most happiness. It's a story of family, motherhood, and raising a child with Down Syndrome - and whatever else might come to mind. It's meant to keep me focused on all the positive things that are happening and help me live the motto "It's all good!"

About the Blogs Name

Our older daugher Sydney had definite opinions about what her younger sister should/could be named. We kept a list of potential names on the refrigerator trying out different options until we settled on Alexandria Taylor... Sydney agreed only if she would be called Ally. Soon after she was born Sydney was calling her sister Ally Baly and then Ally Baly Cinderally... the name stuck and we can all agree that it is perfect!

Cathy
I am happily married to my best friend Gabe and the mother of two beautiful girls, the youngest of which has Down Sydrome. I teach full time in a health program and continue to work on finding the balance between work and being the mom I want to be.